Modern politics nowadays seems more dangerous than a few years ago, being a clear example, the election as President of Donald Trump, but I’m not interested in dig in this personality, rather I’m more worried in what democracies have become.

I can’t deny that democracies are the best way to rule societies, but the outcomes still aren’t desirable. Whatever is the country you live, political parties are becoming more demagogues and convincing the populations with short term proposals, also the presence of hidden powers like company lobbyist, corrupt the real concept of democracy. The damage politicians can made, it’s completely related with how malleable are citizens minds. Political science tell us politicians are a representation of the whole population, so theoretically they have a role to serve society, but funnily enough, we end to serve them.

An interesting analogy it’s compare technology against politics, I know they are completely different concepts but the approach is only analyze  them in a timeframe of 200 years or less and see how much they had advanced in that period. Since the beginning of Industrial Revolution, the pace of productivity  increased a huge rates (graph below). It was a blend between economics and technology delivering a final outcome of extraordinary wealth and increase of world population. Even if some critics say pace of technology change is not accelerating¹, the change it’s constant. 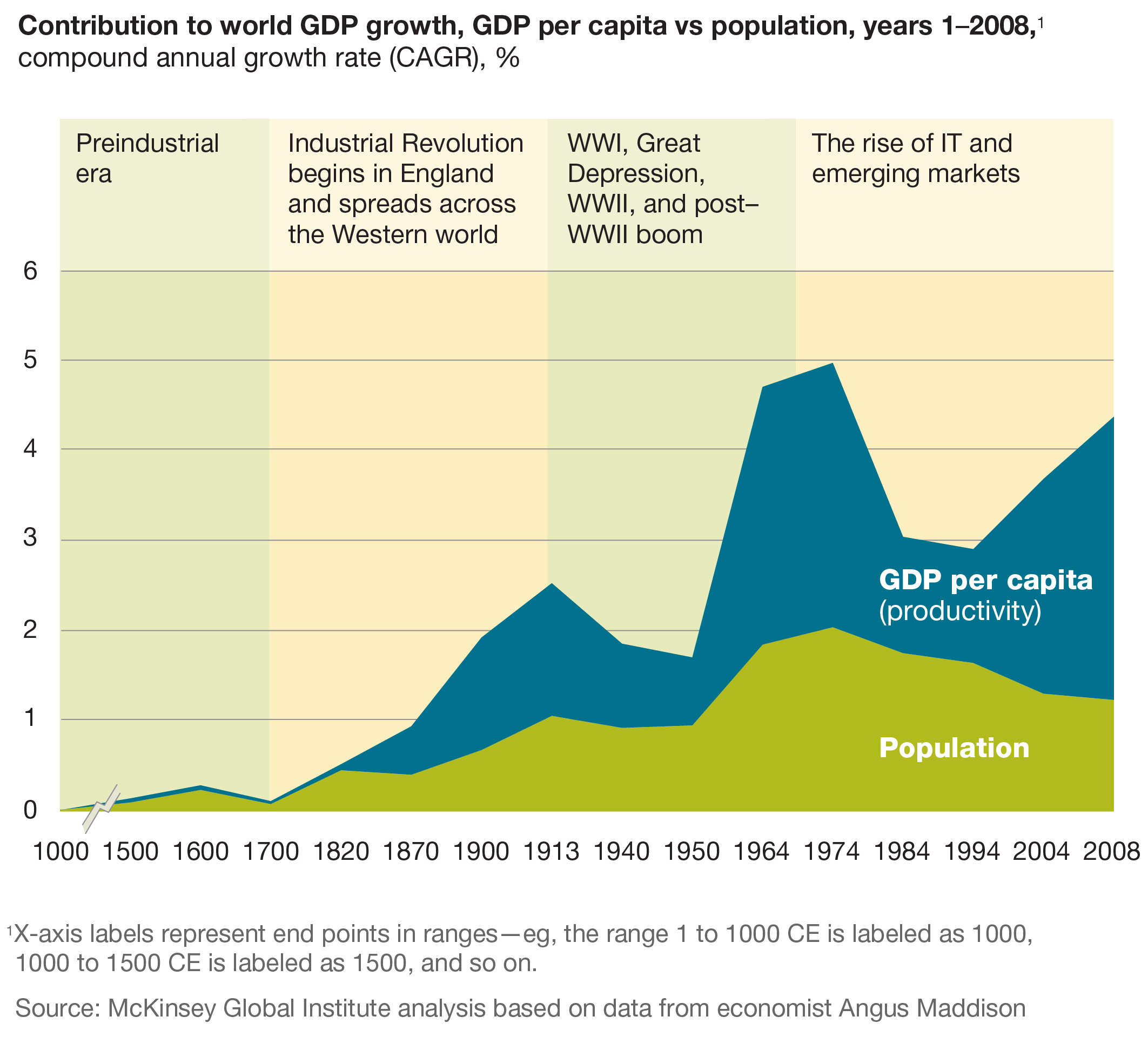 Politics in the other hand, it’s a slower process. It’s also full of new improvements that change the world, but also restrictive policy were the principal impediment to reach that improvements. Some breakthroughs on world politics can be slavery, women’s suffrage or afroamerican rights. Moral is intrinsically connected with politics, where society morals change gradually with the introduction new ideas and perspectives, and then politics takes those changes for laws and government programs. In my point of view politics it isn’t a linear process, it’s a challenging process that generates improvements but also setbacks. So for example, the breakthroughs mentioned before generated a better society, but in the middle you have wars, corruption and anti progressive politics.

What would happen if modern politics could embody innovation and being a linear process of change?. What would happen if politicians couldn’t escape from this dynamic?, generating a structure where they need to follow the rules to change without changing the core?. Overspending in governments projects is a continuous pain for democracies that have less incentives to spend wisely the money, EU have an average of 25% of spending on average² and deficit 3% of the GDP of each country the last 10 years³, so clearly the answer is not more money in to governments.

Citizens in the other hand play a huge role in how societies will perform in the future, but they are damaging democracies because WE aren’t accomplishing our designated duties, on being well informed and have a rational thinking about politics. It’s insane that in 2016, politics still is an emotional response to the masses and parties orientation is more close to be a fan of a sport club rather than a ponderation or meditation about  policy impact or individual actions of a politician, not because I’m right wing I will support blindly a ring wing party, it’s better to have a route of values rather than who has the best idea. It’s an easy dynamic being part of a particular party but at the end of the day,  that doesn’t  give any advantage to evolve politics into a new paradigm. Technology is changing the manner we think, and lastly participating in morals, that’s is the back door of politics.

Finally democracies and politics could evolve as concepts only if we let them, our political systems are old as our countries, if we don’t embrace change we wouldn’t will be alive to enjoy societies where we want to live, a revolution happened roughly 200 years ago with technology, what we are expecting to make same shift with politics?.