I have been avoiding the idea of Stoicism for a while, but the concept keeps reappearing over and over again.

As a part of a series of philosophies from Hellenistic times, stoicism could be group together with skepticism and hedonism, the last two inspired in line with Socrates thought.

In Forbes, an entrepreneur tells the story of a US veteran who was held prisoner by Vietnamese forces in the 60’s.  He used stoicism to overcome pain, memorizing the teachings from Epictetus’s book The Enchiridion – translated means The Handbook.

Seneca, Epictetus and Marcus Aurelius are the most predominant figures in this ancient philosophy. Meditations is one of the books of Marcus Aurelius written meanwhile he was emperor of the Roman empire, as notes of stoic philosophy for himself. The book was never intended to be published.
Epictetus was a former slave, after gaining freedom he opened a school in Greece.
The level of contrast where a philosophy is practised by a former slave and a benevolent roman emperor is quite astounding, moreover being a core and current references for this philosophy.

END_OF_DOCUMENT_TOKEN_TO_BE_REPLACED

Every known science has started as open philosophy pursuit for the truth and the sportiveness of asking questions and wonder the what ifs. Eventually, those pursuits became establish sciences with more deepness and understanding in the studied subjects.

The lack of science in current philosophy dilemmas make me wonder if science would fill those gaps in a short and medium-term future and how it would look like.

The time in between where scientists will enter the scenes of today no sense – maybe they will never do – would generate loneliness and tremendous void among citizens of western society where development has changed or lives tremendously.

Actually, the lake of meaning can be seen in the workplace where a majority of workers lack the sense and purpose the will want to.  Obviously, this is generated by several factors that are intrinsic to the development of western and eastern institutions.

Sense is also a need for feeling connected with a particular group of people and having the internal intuition that the experience in life is worth it.

In more atheistic societies – or at least less Roman Christians – the feeling is that we are small and have no sense, we are meaningless, we are part of randomness and a break of the symmetry in the universe, from the eyes of science and reason.

Fill the void in sense have been the work from different professional and intellectuals generating satisfaction in their audiences for connecting the dots, as we thing historian do for us – something is already happening but we cannot actually see it. From my point of view intellectuals sometimes are filling the void with simplistic ideas that are easy to digest. At the same time and following the same line of thought as Christopher Hitchens referring to liberals, they aren’t brave enough to expose their ideas. I would say that it’s very easy to be on the moral side of intellectualism without challenging the doctrines and ideologies with real pragmatism.

Debates: Are they leading to something?

Does not matter if you are interested in more rights to women or you prefer digital or analogue music players, debates are always a good way of getting our best arguments afloat and giving a second opinion to the counterpart. Also, means a battle of ideas – in a good way – where two parts of a particular society or mainstream collide with to two or more positions that are unchangeable over time.  Let’s take for example a controversial topic, Palestina & Israel.

Both sides are sure they are right and they are not committed to change the current status quo, generating the current division, hate and stubbornness for each side. The debate there is not helping each side to have a constructive conversation about the issue, now the interesting part of that difference of opinions are the younger generations. In both sides, younger generations are leaning for a more peaceful future, but they political representatives Benjamin Netanyahu and Mahmud Abás don’t see this new uprising of good will, they still are emotionally connected with what nation wins. The populations of each side as well are young compared with countries of similar incomes – at least for Israel where the average age is 29 years old against Belgium or France where the average age is 44.

The debate has encountered a degree of distortion where at least I’m not completely certain about the truth, for any side. It’s true that Israel has developed an immense wealth in time record but is also true that they have taken territory that isn’t from there, from the international law perspective rather than the religious part. The other part that is true is Palestine through terrorist organizations wanted to develop the power to gain more power into talks and it seems it hasn’t reached any advance on that matter.

The debate above illustrates that there aren’t straightforward answers but there is a level of discussion we need to follow for the ideas come to the truth. One thing that has to happen is having a better discussion, where bias is completely distracted or eliminated and we are speaking from a position from transparency and honesty into an audience rather impose our personal opinion.

I believe that having better and available debates is the best thing as a human race we could do, we need people that will check every argument technically – it’s happening right now in my home country and in US and UK as well – but also people willing to put non-anecdotical arguments into the conversation. The people could decide into a more informed democracy but also an organization that compose society for having individuals that use knowledge as a real tool rather something we can search in Google whenever we want.

Who remembers the following phrase?

‘Let anyone among you who is without sin cast the first stone’.

The painting at the right shows the exact moment when Jesus wrote in the ground those words. It is imperative to know what the Bible says about this event

Then each of them went home,  while Jesus went to the Mount of Olives.  Early in the morning he came again to the temple. All the people came to him and he sat down and began to teach them.  The scribes and the Pharisees brought a woman who had been caught in adultery; and making her stand before all of them,  they said to him, ‘Teacher, this woman was caught in the very act of committing adultery.  Now in the law Moses commanded us to stone such women. Now what do you say?’  They said this to test him, so that they might have some charge to bring against him. Jesus bent down and wrote with his finger on the ground.  When they kept on questioning him, he straightened up and said to them, ‘Let anyone among you who is without sin be the first to throw a stone at her.’  And once again he bent down and wrote on the ground. When they heard it, they went away, one by one, beginning with the elders; and Jesus was left alone with the woman standing before him.  Jesus straightened up and said to her, ‘Woman, where are they? Has no one condemned you?’ She said, ‘No one, sir.’ And Jesus said, ‘Neither do I condemn you. Go your way, and from now on do not sin again.’

It is no doubt that the event is framed to focus on the mercy of Jesus, but I want to be more subtle and focus on the event before Jesus wrote on the ground. 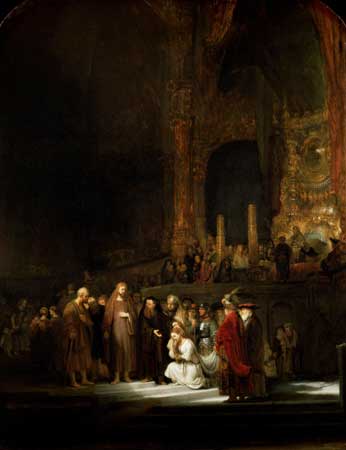 Moses’s Law mentioned in the paragraph above, tell us that is a duty to kill a woman or men by committing adultery, written in the old testament. (Leviticus 20:10).

Now is interesting that religion understood this, improving their own moral for being better off as society. But, Why this event  that has happened 2,000 years ago (more or less) is still happening today?. A question on the side, let hypothesise  that nowadays Christianity is based on Moises Law, we as westerners, Would still be throwing stones to adultery woman or men? as some more orthodox Islamic cultures still do?.

A deeper question is, Why Christianity argues that morality is coming from God as a unique and stable truth, when there is a  a radical change  on moral  based initially on Moses’s Law and after on Jesus’s Law?

How free are we? Taking notice of different levels of free will, some scholars could argue we haven’t any.

The different levels of free will are referred to the different social constructs we live in. As a starting point, we have basic laws and morals, you can argue with that as a “constant” we could elaborate our own free will taking for granted the ethics & morals, for example, you can’t  murder or steal from a store,  taking one degree of freedom out.  Let’s say we accept this level of freedom, we will encounter another level, where we have personal and social constructs regarding our own identity and behavior, from here there are things that are completely legal but we don’t feel to make them because is not part of us. Another degree is diminished into the real freedom. But still, in terms of this constructs, we can decide right?.

As Sam Harris suggest free will is not possible when we analyze how the brain works. The decision-making process on the brain its’s mainly located in our consciousness.  Neuroscientists have shown the decision-making process is made in our unconsciousness before entering into our consciousness. This means we aren’t in full control of what we think we have decided in the first place, our “inner” brain had already make a decision. On top of that and following the same line of thought (also argue by Sam Harris) is the fact that many variables that make our life possible, are given to us. Quintessential examples are genetics, parents and friends*. All these variables we didn’t decide, are inside our unconsciousness as well, generating even more difficult to consciousness for deciding for their own. Lastly, the self-generating process related with free will in real terms it’s in certain way deterministic, reducing or more precisely “killing” the concept of free will.